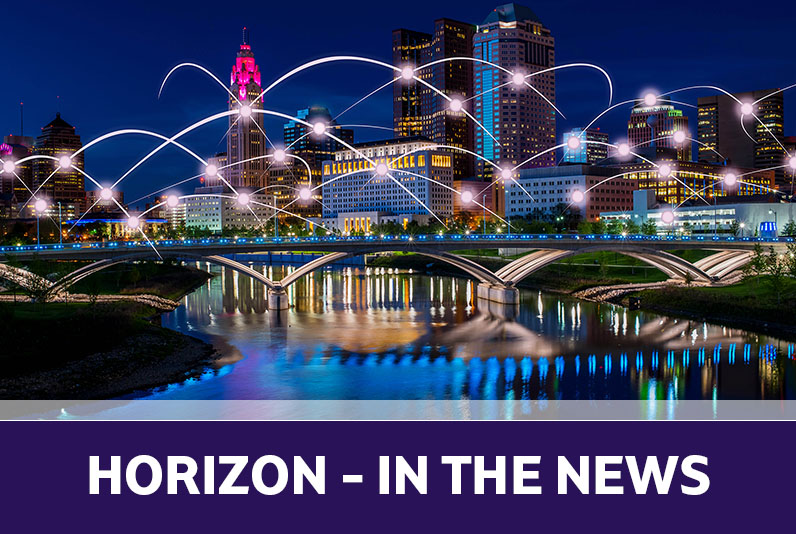 Columbus, OH – November 12, 2019 – Horizon, an Ohio-based fiber broadband company and Official Communications Provider for the Columbus Blue Jackets, has announced the first phase of their Columbus expansion project has been completed. This new enhanced fiber network adds over 200 miles of fiber and ties into Horizon’s existing network of over 4,700 route miles of fiber,  predominantly on the west side, downtown and the I-270 loop of Columbus. In addition to major business parks and high traffic commercial locations, Phase 1 now has seven connected data centers in the Columbus region.

“We announced our plan to develop and build Columbus back in April of this year,” says Bill McKell, Horizon CEO. “While we have been turning up completed sections as we build, we are very excited to announce that Phase 1 is complete and businesses throughout much of Columbus can now benefit from the great fiber services Horizon has been providing for over a decade.”

“Although Phase 1 has just been completed, we have already begun Phase 2 which focuses mostly on the east and south sides of Columbus while also densifying the fiber in some of the Phase 1 areas,” stated Glenn Lytle, CRO for Horizon. “The plan is primarily driven by customers with multiple sites looking to get in on the early stages of the network planning to ensure their businesses will be passed with the new fiber plant in the manner most beneficial for their needs.”

The total project expansion not only adds nearly 600 miles of fiber to Horizon’s footprint, bringing the overall network total to over 5,200 miles of fiber, it has also brought more jobs to the Columbus area. Ten new jobs have already been added since April with several more expected to be filled by the end of 2019.

Businesses wanting to inquire about the network expansion are encouraged to reach out to Horizon directly by phone (866) 418-8126 or request a quote online https://www.horizonconnects.com.

Founded in 1981, Novacap is a leading Canadian private equity firm with $2.6 billion of assets under management. The firm’s unique investment approach, based on deep operational expertise and an active partnership with entrepreneurs, has helped accelerate growth and create long-term value for its numerous investee companies. With an experienced management team and substantial financial resources, Novacap is well positioned to continue building world-class companies. For more information, please visit www.novacap.ca